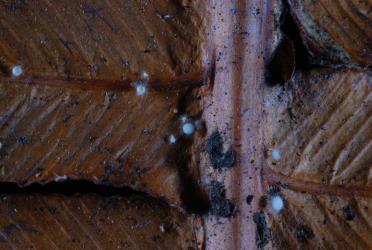 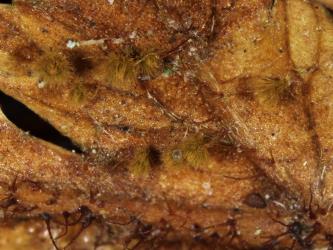 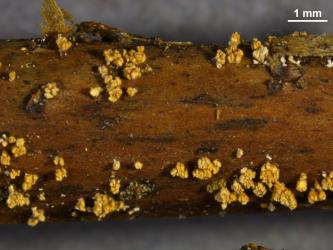 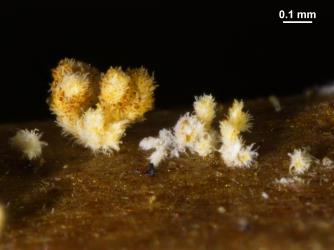 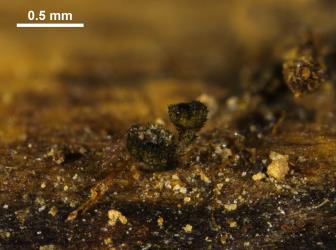 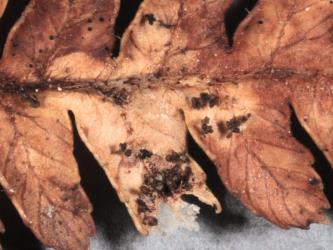 Ameghiniella australis Speg. 1888
PDD 99209 (https://scd.landcareresearch.co.nz/Specimen/PDD_99209) has been sequenced. The ITS sequence supports Irma Gamundi's opinion that Ameghiniella is a synonym of Ionomidotis. There is no sequence data available for an Australian specimen identified as Ionomidotis australis. The three A. australis specimens in GenBank represent two different species (one from Chile and Argentina, another from Chile) and the New Zealand specimen PDD 99209 is genetically similar to these. This perhaps reflects the A. australis ssp. australis versus A. australis ssp. valdiviana propopsed by Gamundi, Mycological Research 95: 1131-1136, 1991.
Resolving the taxonomy of these fungi needs a sequence from Australian material - there may be one or more A. australis-like species in Australasia.
Atropellis Zeller & Goodd. 1930

CBS 197.64 is a culture of Atropellis piniphila, deposited by J.C. Hopkins, isolate 61. Hopkins (Canadian Journal of Botany 39: 1521-1529, 1961) obtained isolates he identified as A. piniphila from Pinus contorta from both germinating ascospores and from diseased wood. There is no published record of the source of isolate 61, apart from that it was from one of Hopkins isolates from Alberta.

The culture was presumably correctly identified, as it was deposited by J.C. Hopkins who published several papers on this fungus in the early 1960's. The type species of Atropellis is A. pinicola. Ecologically and macroscopically A. pinicola and A. piniphila are very similar. They differ in ascospore size, filiform (32-63 x 1.5-3 um) in A. pinicola, oblong-elliptic (16-28 x 4-7 um) in A. piniphila. No DNA sequence data is available for A. pinicola, to provide phylogenetic confirmation of the generic relationship.

Atropellis is at present placed in Godroniaceae (Index Fungorum 2020), but without genetic support (Jaklitsch et al. 2016, Syllabus of Plant Families). As was shown by Partel et al. (Fungal Diversity 82: 183-219, 2017) in their study of encoelioid fungi, taxonomic concepts of Leotiomycetes with erumpent, leathery, dark walled apothecia have been developed largely on the basis of macroscopic appearance. These authors found that the fungi traditionally placed in Encoelia and Encoelioideae to be widely distributed across eight different lineages within the Leotiomycetes, including Godroniaceae. Such a morphology has clearly evolved multiple times. The phylogentic position of A. pinicola needs confirming, as does the generic relationship between A. pinicola and A. piniphila.

A. piniphila has a macromorphology nothing like any other known Hamatocanthoscyphaceae. Interestingly, Pinus-associated Infundichalara and Xenopolyscytalum species do belong in this family. Is it possible that if CBS 197.64 was isolated from plant tissue rather than ascospores, that it is in fact a pine-associated Infundichalara or Xenopolyscytalum sp. the conidia of which were by chance in the vicinity of the Atropellis piniphila canker?

Small apothecia develop in groups from a branched stipe, dark hairs on a pale receptacle, forming on Dicksonia, on dead pinnae on otherwise living fronds, or in pale patches of dead fronds.

Apothecia form on dead fronds of Cyathea species. Apothecia with greenish hymenium when fresh, receptacle with dark hairs, margin of cup sometimes deeply lobed to give a multi-cupped appearance, but stipe not branched. When dry, pale receptacle surface visible through the dark hairs and in places the hairs may be rubbed off to expose the pale receptacle surface. Excipulum (squash mount) of cylindric cells (approx 4-6 x 8-15 µm) with thick walls. Hairs 50-60 x 3.5-4 µm, cylindric, apex undifferentiated, roughened all over, brown vacuolar pigment. Paraphyses 1.5-2 µm diam., undifferentiated to the apex, about same length as the asci; amongst the asci and the paraphyses are elements with the same morphology as the hairs, the hair-like elements extending 30-40 µm beyond the asci. Asci 55-70 x 6-7 µm, cylindric, taper gradually to small, subtruncate apex, wall slightly thickened with tiny J+ pore that extends all the way through the wall and flaring slightly to the outside, 8-spored. Ascospores 16-21 x 2-3 µm (average 18.6 x 2.4 µm), cylindric-fusoid, more or less straight, symmetrical, tapering gradually and evenly to acute ends, 0-septate.
The morphology matches very closely that described by Spooner (1987) for IMI 263462 ex fern stem ex Queensland. He noted that this specimen was close to L. oncospermatum and L. lanariceps, but that it did not fit either species well. He speculated that the unusual morphology (compound apothecia, thick-walled excipular cells, hair-like elements in the hymenium) may reflect abnormal development in the small specimen he had available. The matching NZ specimens make this unlikely.
Known from two collections from Northland, PDD 111228 and PDD 111222, which have ITS more or less identical. ITS has a 97% BLAST match to specimens from tropical Asia that have been referred to L. oncospermatum (e.g. GenBank MK088085, KP903566). Based on Spooner 1987 and Wu et al. (Mycotaxon 67: 341-353, 1998), compared to L. oncospermatum, the Australasian species has darker hairs that lack resinous exudate, and shorter asci and ascospores. Another NZ specimens with no DNA data is the same species, PDD 82943. All three specimens are from Cyathea.

A macroscopically distinctive species with long, stiff, mustard coloured hairs. A few apothecia in some collections with a branched stipe. Known only from Dicksonia

Apothecia up to about 0.8 mm diam., stipitate, densely covered with long, flexuous, white hairs. Excipular cells 7-8 µm diam., more or less square in shape, with slightly thickened walls, hyaline. Hairs 150-300 x 3 µm, flexuous, undiffereniated to the apex, roughened all over. Paraphyses lanceolate, 4-5 µm diam. at a level near top of asci then tapering to narrow rounded apex, extending 20-30 µm beyond asci. Asci 40-55 x 4-5 µm, cylindric, tapering suddenly to small subtruncate apex, wall slightly thickened at apex, J+ pore extending right through the wall, flaring slightly towards the outside of the wall, 8-spored. Ascospores 8-12 x 1.5(-2) µm, cylindric, swollen near centre, ends rounded, uniform in shape to both ends, radially symmetrical, hyaline, 0-septate.
Found on pinnae of dead leaves, or on dead patches of living leaves, associated with slightly bleaching of leaves.
The ascospores are very similar in shape and size to those from PDD 108683, also with white hairs also on Dicksonia. This second species, known from a single specimen, differs phylogentically and has shorter hairs (50-100 µm).
L. brevisporum has similar long, white hairs, but lacks the lanceolate paraphyses, has slightly curved ascospores, and cylindric rather than more or less square excipular cells.

Mycosphaerella enteleae (Dingley) Sivan. 1977
ITS tree from top ex-type BLAST matches to ICMP 21726/PDD 108768, Mycosphaerella enteleae. Results suggest this fungus perhaps represents another genus.
Pezizellaceae Velen. 1934
Austropezia is amongst a macroscopically enigmatic group of specimens that belong genetically in the Han et al. (2014) clade 3. Baral (in Jaklitsch et al., 2016) accepts this clade 3 in Pezizellaceae. Although such a link is strongly supported if Calycina sensu Baral is added to the Han et al. (2014) analyses (based on ITS, LSU, mtSSU, RPB2), there is no strong genetic support for the family in this sense in more extensive multigene analyses (unpubl. data). This lack of support could reflect inadequate taxon sampling in the multigene analyses. Baral notes some micro-morphological characters that support his concept of the family but these have not been examined for the New Zealand taxa. These taxa are macro-morphologically diverse: - several of the New Zealand taxa have their immature apothecia covered with a clypeus-like layer, the apothecia erumpent through several irregular splits. These include D1327 'Leotiaceae crazy paving', D2488 'gen nov Chionochloa' and D 2518 'on Phormium with clypeus'. - Several other New Zealand species are superficially Arachnopeziza-like in that they are associated with well-developed subicular hyphae (but they are genetically distinct from Arachnopeziza). These include Austropezia samuelsii, the only one of these species with a name. Note that Spooner in his discussion on Austropezia/Eriopezia, compared the subiculum of some species with a loosely constructed stroma - perhaps a similar explanation could apply here? - Other taxa such as the Han specimens Mollisina uncinata and Phialina lachnobrachyoides and D1137 have little or no subiculum, and are simple, pale coloured discs, usually with poorly developed hair-like elements.
Rhytidiella hebes P.R. Johnst. 2007

Whether or not the type species of Rhytidiella, R. muriformis is phylogentically the same is not known, but morphologically it is close to R. hebes. The morphology seems to fit reasonably well with Leptosphaeriaceae apart from the large groups of closely-grouped ascomata. Cucurbitariaceae mostly have muriform ascospores.

Whether or not the type species of Rhytidiella, R. muriformis is phylogentically the same is not known, but morphologically it is close to R. hebes. The morphology seems to fit reasonably well with Leptosphaeriaceae apart from the large groups of closely-grouped ascomata. Cucurbitariaceae mostly have muriform ascospores.

Sarcosoma orientale Pat. 1909
Based on ITS and LSU sequences in GenBank, Sarcosoma (type species S. globosum) is polyphyletic. S. orientale (at least from a New Zealand specimen) is in a clade with Plectania and Plectania-like species, but on a long branch. It is not altogether surprising that it is genetically distinct from S. globosum - macroscopically very similar but soil-inhabiting, and possibly mycorrhizal (see http://iucn.ekoo.se/iucn/species_view/120549/). S. orientale is a wood-inhabiting saprobe.
Stictis Pers. 1800 [1799]
[Unable to display]
Trichoglossum Boud. 1885
Based on ITS sequences, Trichoglossum appears to be polyphyletic, most Southern Hemisphere specimens with DNA sequences available (blue in the attached image) falling into a clade distant from Trichoglossum sensu stricto (green in the attached image), but both clades do occur in New Zealand (e.g. PDD 116702, red in the attached image, is in Trichoglossum s.s.).

Please ensure the record classes you want to download are selected. Then indicate the data standard and file format you require for each class. Refer to the Help page for further information about downloading data.*

This address will be used to send a link to the data you have requested once the download is ready.
Please indicate the main download purpose for this data to assist us in understanding the use to enable ongoing improvements and reporting.

Your request has been confirmed.

You will receive an email notification when your request is ready to be downloaded. This email will have a subject 'Biota of NZ: Download request', and will contain a link to download your request.
If you don't receive an email, check your junk mail folder.
Please contact us with any questions or if you need further assistance.

An unexpected error has occurred. Please try again or contact us for further assistance.

The value you have selected falls outside of either the minimum or maximum range allowed.